After Patricia had a stroke, her son Bob was determined to find a way to maintain her quality of life—and keep her at home.

Bob lives in Sagamore Beach, Mass., and his mother had a house down the street. Before she could be discharged from a rehab facility in Braintree following the stroke, Bob had to line up home care so Pat could come to his house.

Bob had difficulty finding a caregiver to meet his needs given his full-time job in the Facilities Management department at Boston College.

After a couple of false starts with caregiving agencies, Bob connected with Peter Carey, Executive Director of Homecare Choices.

While other home care providers had restrictions or hesitations that didn’t align with Bob’s need for care from very early in the morning until early evening, he recalled Peter Carey simply asking, “What would you like?”

No other agency would send someone before 6:30 a.m., but Bob needed to be on the road earlier for his commute to Chestnut Hill. He asked for a 5 a.m. arrival, and Peter got the OK from a caregiver. Still nervous about getting to work on time, Bob asked if 4 a.m. might work. Again, Peter Carey reached out and got a “yes” from the caregiver.

“It was like a godsend,” Bob said, but it was also just the beginning of a relationship between Homecare Choices’ caregivers and a client that went far beyond administering basic care, proving to be highly rewarding for both sides.

Liz DeDecko was the Homecare Choices primary caregiver who arrived at 4 a.m. and stayed until 3 p.m., before caregivers Andrew or Sarah would arrive and stay through 7 p.m.

Pat was confined to her bed and they helped her remain comfortable, changed her, managed her medications, provided meals, and put on her favorite movies, among other tasks. At each shift change, the caregivers overlapped for an hour when they would go over notes, discuss what was happening that day—and spend time with Pat together.

The relationships that developed went far beyond the task-oriented interactions for both sides. 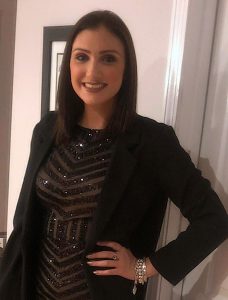 “Pat was really like a grandmother and really kind and sweet, and she had a lot of good stories,” Liz said. “She was very funny, so she should always chime in and say something funny. We got really close with Pat. She was very supportive.”

“To me they were basically like her grandkids,” Bob agreed. “It was more like a family dynamic,” which also included him. “They said, ‘We’re just aides.’ To me, they were her angels, and they were her view to the outside world. There was a lot of laughter on both sides.”

Sometimes when Bob was at work, Liz and Andrew or Sarah would take Pat for a walk in her wheelchair past her own house and down to the beach to enjoy the scenery, the birds, and the flowers.

“When I was gone and they were taking care of her, she was happy,” Bob said. “She was just happy. I saw how she was with them and she felt good. That put me at ease. Everything they did for her was really good.”

“We do more than other agencies,” Liz said, mentioning how much Pat loved her chihuahua, Penny. “So I brought the dog over for Pat.” Liz, Sarah, and Pat all rode horses and shared a love of animals.

Liz, Sarah, and Bob were all there the day Pat passed a few days after Christmas in 2018.

“It was definitely a life-changing experience to see someone you’re so close to and have taken care of for a year pass away,” said Liz, who visits Pat’s gravesite and brings flowers.

The caregivers involved in Pat’s care went out to dinner with her family and friends after the funeral, something that Homecare Choices encouraged, Liz said. It helped provide a sense of closure.

Before Pat passed, Liz asked Pat and Bob if she might have a quilt that was in Pat’s room—one of her thrift shop acquisitions—and they agreed. Liz keeps in her room as a remembrance of their special relationship.

“I tell people she went with love, laughter, and music,” Bob said, noting that both Hospice and VNA staff commented on how good the caregivers were with Pat. “I can remember the Hospice nurse saying, ‘To have one person like that is wonderful. To have three, you’re truly blessed.’”

Potential clients who want to learn more about Homecare Choices and its services may reach out to Executive Director Peter Carey by phone at 508-313-2529, or by email at petercarey@homecarechoices.com. There’s also a contact form on the website and free consultations are offered.