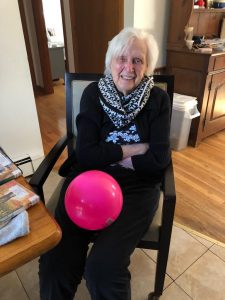 Families seeking the best care options for an elder dealing with challenges and complexities can find the search for the right situation frustrating, especially when on a quest to preserve a high quality of life for a loved one who deserves more than check-the-box services in the twilight of a long and rich journey.

When Margaret’s family brought her back to Cape Cod from Florida following the death of her husband in 2017, as she approached her 90s, their vision for a preferable care situation seemed at first to eclipse the available care options.

“The whole experience was so new to us … having my Mom here, and her having Alzheimer’s,” recalls Margaret’s daughter Stephanie.

She and her sister Mary—two of Margaret’s seven children—live on the Cape and became the hands-on team overseeing their Mom’s care.

“We floundered around a little bit trying to figure this out,” Stephanie says.

In the end, Homecare Choices and Executive Director Peter Carey choreographed a care plan that had many moving pieces but seamlessly gave Margaret and her family a professional suite of homecare services, provided by engaged, compassionate caregivers who enriched Margaret’s life before her death in June of 2020.

“I can’t speak highly enough about these people,” Mary says. “They all loved Mom, and they all did things in their own way with her.”

There was a learning curve for Margaret’s daughters and their siblings before they arrived at a place of equilibrium with the help of Peter and a team of caregivers that included standout caregivers Erin, Michelle, Candace, and Ethel, among others.

After Margaret returned to Cape Cod, the family initially chose an assisted living facility with a memory care unit, but it quickly became clear the facility’s checklist of services didn’t provide the level of assistance and engagement Mary and Stephanie wanted for their Mom.

“They had group activities. Alzheimer’s patients forget how to do that. They really need much more,” Mary explains in giving an example of where the needs and the care didn’t fully align.

After finding and connecting with Peter, Mary and Stephanie initially settled on a plan that had Homecare Choices’ caregivers supplementing the services provided at the assisted living facility during two shifts each day—which intensified after Margaret fell and broke her pelvis, and after she fell again.

“It became clear we couldn’t leave her alone at night,” Mary said.

Margaret stayed at the assisted living facility for approximately a year, and during that time it became clear a different plan was needed. Meanwhile, Mary had been telling her siblings, “I would love to have her at my house.”

“He knows how to find good people,” Stephanie says of Peter, and that was the key.

“They really cared about her, which gave us a lot of peace of mind,” Stephanie adds. “Just knowing we had people there who loved her and cared about her meant so much.”

Erin, who handled daytime shifts, was one of the caregivers whose rapport with Margaret stood out for the family.

“Erin has this huge smile that just made my Mom so comfortable and at ease,” says Stephanie. “I think my Mom also had the feeling that she was like family.”

“Erin was always the one who would take Mom and do things with her, and she always came with activities to get Mom to engage,” Mary adds. “You could tell she was there to draw her out and make her interact. It was really beautiful to watch. And Mom loved her, she really did.”

When Mary’s son got married, the family asked Erin to bring Margaret to the wedding. “She helped get my Mom ready that morning, got her there, and was part of the family for that wedding,” Stephanie recalls.

Because Margaret’s family was very spread out, Mary and Stephanie arranged a system with Peter to have caregivers send updates at the end of every eight-hour shift, covering things such as what Margaret did, what she ate, and how she felt.

Margaret and her family made an equally deep and favorable impression on Erin.

“She just came from a great family and raised a great family,” Erin says. “She really felt like family to me. I will forever be grateful to Homecare Choices for even meeting Margaret.”

One distinguishing quality for Erin was her willingness to take Margaret places outside of the house. “I would put her in the wheelchair and take her around the neighborhood,” Erin says. “I would bring her to places to have lunch.”

It was exactly the extra-mile quality that enriched Margaret’s struggle with the deepening impact of Alzheimer’s, and a blessing Mary and Stephanie will never forget.

“I can’t think of a single aide who didn’t treat my Mom with love and respect,” Stephanie says in stressing that all the caregivers were wonderful. “Everybody had their own relationship with her.”

Mary recalls one Friday evening after the COVID-19 pandemic set in when she was alone caring for her Mom, who was starting to fail and entering the Hospice phase. It was the first night they had a hospital bed in the house and Mary didn’t realize the wheels weren’t locked. As Margaret leaned against the bed it moved and she slowly and gently fell to the ground.

Mary couldn’t get her up. “I called Michelle and she was here in less than five minutes and helped me get Mom in bed,” Mary recalls. “They just go above and beyond.”

The sisters also stressed how well Homecare Choices managed to safely and seamlessly continue providing care during COVID. “When the pandemic hit, I thought, ‘Oh my gosh what are we going to do?’ I don’t think they missed a beat,” Stephanie says. “They got really careful, but they just kept coming. I was so pleasantly surprised by that.”

Mary stresses one other factor important to Margaret’s family not directly related to her care. “I feel very strongly that the caregivers in this country in general are not well looked after by their employers,” she says. “We didn’t want to hire an agency that had that point of view, so we were delighted that Homecare Choices is nonprofit and the wages were higher. It was more in line with my values.”

Potential clients who want to learn more about Homecare Choices and its services may reach out to Executive Director Peter Carey by phone at 508-313-2529, or by email at petercarey@homecarechoices.com. There’s also a contact form on the website and free consultations are offered.